Breeders vs the Barren: The Airplane 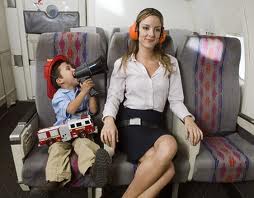 For the most part I get along just fine with kids.  I may have none of my own, but that doesn't mean I don't like them.  Other than an unintentional propensity to make infants cry, I harbor no ill will towards children.  I am generally indifferent and occasionally amused, even delighted by them.

It's the parents that are the problem.

And in the fertile battlefields of parents versus non-parents, none is more fecund than the inside of a commercial airplane.  It is the gladiators' arena of The Breeders vs. The Barren, and I was never one to shy from a fight.  It's not that I am unsympathetic to the plight of parents travelling with small children.  These days air travel is a painful experience, from the security lines to the haggling for overhead bins.  And that's all before you start hurtling yourself through the air in a metal tube filled with stale air and germs and implausible foil-covered units of nourishment.

Undoubtedly all of this is harder with kids.  But the bottom line is neither I nor any of your fellow passengers made you have that kid you now have to entertain for hours on end.  You already got special treatment in the form of early boarding -- which means airlines now, perhaps appropriately, put parenting on par with active military duty -- so please, all I ask is bring a pair of headphones for your child's game/personal DVD player/noise-making machine.

Just last week I was on a cross-country flight when I dared to make this very request of a mother of a child of about four.  I had been forced to listen to the relentlessly chipper, dog hearing-pitched jangle of the girl's animated feature from the row adjacent for about twenty minutes or so when I finally asked the flight attendant to intercede.  The mother reported back -- also via the flight attendant -- that it was either the DVD player or the screams of the child.  I was just starting to fish around in my purse for my own headphones to offer to the mother when I noticed a very angry looking older woman, presumably the grandmother, produce a pair of headphones from her own purse.  She then hissed protestations across the aisle at me that she could not hear it, so how could I?  I restrained myself from hissing back that her hearing aid must be broken and instead opted for an antagonistic smile.  Just then the presumed grandfather turned around and starting making hand gestures at me as if to suggest I should jump out of the plane.

I thought it was over, but no.  My husband was accosted by the mother when their paths crossed en route to the lavatory.  She was positive that I was using her child to get an upgrade to business class, demonstrating that what she lacked in manners she made up for with a rich fantasy life.  She then made the same jump-out-of-the-plane hand gesture at my husband before they parted ways.

And it still wasn't over.  As we left the plane, the presumed grandfather informed us that he did not appreciate my husband telling his partner, the mother, to shove off, not only proving once more what a rich fantasy life this mother had, but also that he was a dirty old man.  (Not to mention the conundrum this created over who exactly the presumed grandmother was in this triangle.  How awkward for your partner to be the same age as your mother.)

I left the plane rattled, as did husband, and reconsidering if I was an unreasonable person.  My conclusion was that, no, I am not.  When a mother has a crying child on a plane, I never give her a hard time.  I realize that mother is as upset by the crying, probably more so, than I am.  But in this case it was preventable noise, and there was no excuse.  My other conclusion was that being a parent, or even a grandparent, doesn't prevent you from being an asshole.
Posted by Jennifer Richardson at 4:58 PM