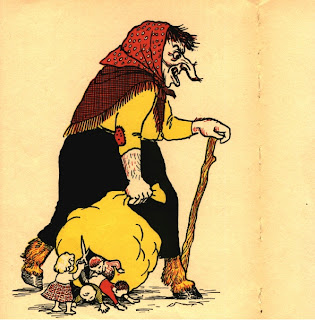 As I've gotten older Christmas has become more of an ordeal. It's primary function these days is to remind my parents that I've failed to bestow them with grandchildren, which means going home is not an attractive holiday option. But now, at last, I think I may have found a place where even I could get into the Christmas spirit.

"Christmas in Iceland is not a season for sissies." So began the article I found flipping through the Iceland Air in-flight magazine on my way to Reykjavik for work last week. Entitled "Maneater," it was all about Grýla, Iceland's Yuletide ogre, and she's too good not to share.

While other countries have Santa Claus and reindeer, Iceland has Grýla and her sons, the Yule lads.  Each year Grýla descends from the mountains "to kidnap misbehaving children and drag them back to her lair in a burlap sack."  She ate her first husband and still dabbles in cannibalism, enjoying the occasional dish of stewed child.  Best of all the article notes "she is...an example of a strong, decisive female in Iceland."  (Suddenly Björk makes more sense.)

Grýla's thirteen sons -- her children with her third husband -- play the role of Santa Claus,  leaving gifts for well behaved children.  No Dashers or Dancers here; instead the Yule Lads have names like Pot Licker, Sausage Swiper, Window Peeper and Keyhole Sniffer.  Lest you think Christmas in Iceland is starting to sound all warm and fuzzy, don't forget about Grýla's cat, who inexplicably devours children who don't get any new clothes for Christmas.

Posted by Jennifer Richardson at 12:19 PM