A childfree vacation in P'town 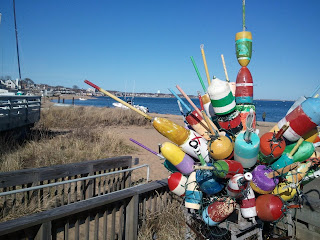 Last weekend when I should have been posting my latest blog, I was busy hanging out at the beach.  Big things are afoot in my household -- namely a move home to Los Angeles from our current outpost in Boston -- and so, in an effort to enjoy New England while we are still here, we made a last minute trip to Cape Cod.

While there we stayed at our first ever child-free hotel.  I didn't choose it because of this.  In fact I only discovered it when I called to make the reservation and the receptionist asked me if everyone in our party was over eighteen.  Given the hotel is in Provincetown, MA -- whose summer calendar includes "Bear Week" and "Girl Splash" -- I assumed this was a euphemism for gay-friendly.  My incredibly acute powers of perception were validated when I noticed the rainbow image on the hotel website.  The hotel's policy on children was right above the rainbow, and, I thought, rather eloquently and firmly stated:  "The Inn is regarded as a quiet escape and romantic getaway for most of our guests, and we work hard to foster that environment. Since it is not an appropriate environment for children, no one under the age of 18 is permitted at the Inn at any time. Unfortunately, we cannot make any exceptions."  (Amusingly, the pet policy appears right underneath, with a rather different tone:  "Let the pet pal you love travel in luxury with you...Pets Are Welcome.  Whether checked in for work or play, what could be more wonderful than snuggling up with your favorite furry friend during your stay?") 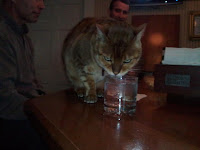 The hotel residents were a mixed crowd.  We spent the wine and cheese hour on our first evening with a thirty-something couple who had left their infant with her grandparents back in Boston.  We headed to the nearby Shipwreck Lounge for our second, third, and fourth wine hours, where Gary the barman doled out tankards of Pinot Grigio to the dulcet sounds of MDNA.  We were joined by Marley the bar cat, who drank his water out of a highball glass, and a gentleman named Thurston Hartwell, III.  The latter claimed he could trace his ancestry all the way back to the Mayflower, which was appropriate since Provincetown was the first landing place of the Pilgrims.  Mr. Hartwell was as close as we got to the town's early American history since the Pilgrim Monument in the center of town was closed for repairs. 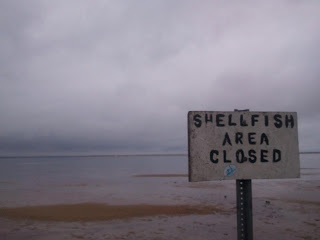 Saturday was cold and moody, and we shook off the excesses of the previous evening with a long walk along the jetty and around the dunes of Herring Cove.  Our only regret was that we hadn't brought our bikes to explore the paths of the Cape Cod National Seashore.  In the evening, after another wine and cheese hour at the hotel, we headed to one of the few restaurants in town that was open (many weren't set to open until later in April or early May when season officially starts).  Mews a shingled, seaside house in the West End, was heaving but expertly run.  We were early for our reservation, but seated quickly thanks to a family of three -- a little girl with two moms -- who didn't linger after they finished their meal.  She was the only child we saw all weekend.

Posted by Jennifer Richardson at 4:57 AM