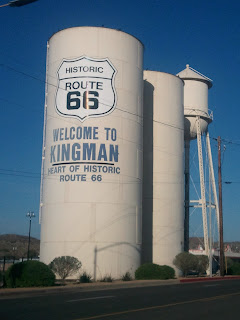 The death march home to Los Angeles continued, this time with driving rain at high altitude, broken only by a stop for breakfast at Denny's in Flagstaff.  After two nights in kitsch motels, I have never been happier to check into a Marriott than I was in Kingman, Arizona.  We used the gym, dawdled on the wifi, and generally reveled in the generic newness of it all.  While lounging by the indoor swimming pool, my husband read an article about Oatman, Arizona, and became charmed with the idea of a small detour to visit the honeymoon suite of Clark Gable and Carole Lombard in this tiny western town.

The next morning we shared our complimentary hotel breakfast buffet with a group of bikers called the Messengers of Recovery.  They shared leather and facial hair with their brethren of the biker genre, but were telling  stories about a friend who had "been to the other side" and seen heaven.  After a winding thirty-mile drive on a tiny road, we were joined in Oatman, Arizona by approximately fifty bikers of the more traditional sort.  We took some pictures but decided it was best not to linger.  In no time we had crossed the border to the promised land.  Our portal: Needles, California.

It took us eight days to cross the country and, despite my aspirations, this was anything but the ultimate childfree vacation.  It was a chore -- needless to say, one I would not recommend that anyone attempt with children.  To make it more of a vacation we should have taken more detours, and there was plenty to see along the way.  My notes of missed opportunities include Johnnie Brock's Dungeon, the Halloween headquarters of Missouri; Darryl Starbird's Custom Car Museum in Fairgrove, Oklahoma; the Top of Texas Catholic Superstore, just outside of Amarillo; the Dinosaur Museum in Tucamcari, New Mexico; and Bearizona, a drive-thru (how American!) wildlife park.  We have one more car to get back to L.A., so who knows, maybe I will see the Jesse James Wax Museum before I die.

Posted by Jennifer Richardson at 9:23 AM