"Which underwear should I wear to the gynecologist?" and other ladies' etiquette questions 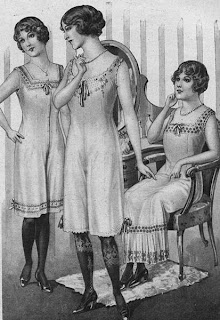 My decision not to have children means I have little use for an OB/GYN, except of course for that bi-yearly ritual of getting a pap smear.  Women of all child-orientations can bond over this singular delight.  So in the spirit of inclusiveness on this blog I thought I would write a little something about it, inspired by my experience this very morning.

I have never excelled in the medical patient arena.  I have been known to faint when visiting people in the hospital, require grand distractions while having blood drawn, and am enormously grateful that George Clooney now has a career outside of ER, which for me was unwatchable television.  I say all this to explain, at least in part, why I felt so apprehensive as I got ready this morning for my 9AM doctor's appointment, pap smear included.

The anxiety started in the shower when the thought crossed my mind I should do a little neatening up around the area of soon-to-be-focus.  I am staunchly opposed to the practice of waxing back to an infantile state that is in evidence on so many magazine covers these days, but a little tidying seemed in order.  It was, I reasoned, no different than brushing, flossing, and gargling before visiting the dentist: a general courtesy. Then I remembered I ate Taco Bell for lunch before my last dentist appointment and felt a little bad.  (Sorry, Dr. Shaibani!)  My concentration must have slipped thinking about the whole Taco Bell incident because next thing I know I had nicked the highest altitudes of my inner thigh.  Now I was going to have dried blood on my leg which would make the doctor think at creepy best I shaved just for him (did I mention the doctor was a him?) or, at worst, I have hygiene issues.

With one arm wrapped around my thigh to try and staunch the blood with a clot of wet toilet paper, I started thinking about the next challenge: which underwear to wear?  A thong was definitely out.  Boy cut seemed suitably modest until I noticed one pair had hearts on it, the other polka dots -- way too frivolous for the business at hand.  I settled on a pair of navy blue briefs that, despite lace edging, seemed to send an appropriate signal of modesty.  Next up was what outfit to choose.  It had to be something I could maneuver in and out of easily, so I chose a loose dress.  Unfortunately it went with a pair of espadrilles that were just an inch too high to look sensible, but by this point I was running late and had no time to change.  As I left the house my husband asked why I was dressed so posh, which was the second time I felt creepy that morning.

Of course once I got to the doctor's office I realized all my fuss was for naught.  The nurse had me wearing nothing more than a sack of a robe with a gaping back by the time the doctor arrived.  His opening salvo was to inform me his female colleague was going to perform the pap smear portion of the exam.  I must have looked disappointed as he quickly followed with an explanation that 99% of his patients are male and he is much more familiar with prostates (turns out he is an internist, not an OB/GYN), which left me feeling somehow snubbed after all the work I had put in.  He did, however, give me a consolation prize of a breast exam.  And since I have just turned forty, he also set me my next challenge: choosing the right bra for a mammogram appointment.
Posted by Jennifer Richardson at 2:24 PM