The ultimate childfree (not counting my husband) vacation - Day 1: Boston to Niagara Falls 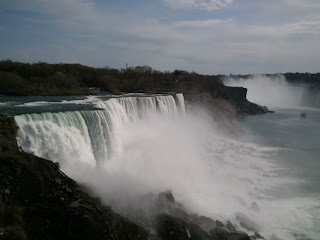 The road trip did not start well.  My husband was pissed off over the fact that I was in Reykjavik for work in the days immediately preceding our departure.  To complicate matters he had developed a bad cold, and thus I spent most of my business trip in Iceland fielding text messages accusing me of abandoning him with all the packing when he was "deathly ill."  He also expressed his displeasure by allocating me exactly half of a small black duffel bag to pack the belongings that would sustain me for the next two and a half weeks.  This was not completely unfair given that he was moving to Los Angeles permanently to start work while I would be back in Boston in a few weeks to pack off our furniture and the remainder of our belongings with movers.  But it was a little unfair when you consider that the items he had selected as essential to his life for the next six weeks, and therefore worthy of a spot in the car, included a big screen TV, three computers, a sound system, and a movie projector.

My half of the duffel bag was packed before I left for Reykjavik.  I had taken care to hide two dish towels and a rolled  up set of bath towels in amongst my clothes since I knew he would not deem such items worthy of precious car space.  But apparently I had not used enough care.  As he packed his half of the duffel bag the night before we set off, he discovered the contraband linens.  Only a dusty old window screen prevented them from being hurled down onto Beacon Street.  I chalked this all up to the anticipatory stress of starting a new job and chose my moment when he wasn't looking the next morning to repack the towels.

I wish I could say that once the linens were secured things got better, but things always get worse before they get better.  The leaky cups of Starbucks were a mere precursor to the satnav getting things wrong right off the bat.  We had battled our way through Brookline and were ten miles down the highway when we noticed the signs to Rhode Island and the satnav calculation that it would take eleven hours to arrive at a destination that was supposed to be six hours away.  Words were exchanged.  Satnav settings were tweaked.  And eight hours later we arrived in Niagara Falls.

Into the Welcoming Arms of Niagara Falls 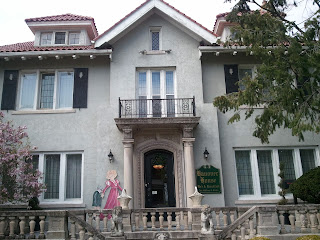 We spent our first night of the road trip in a dilapidated neighborhood of formerly grand houses of the Disney Haunted House architectural style.  Thankfully the Hanover House B&B was not as run down as some of its neighbors.  While we were parking in the back we noticed the curtains twitch.  The rotund older lady of the house was there to greet us when we arrived at the front door, not with a warm welcome but with a barrage of questions.  Her opening gambit was, "What room are you staying in?" to which I replied that I didn't know as we were just checking in.

This did not satisfy her.  "You had to pick a room when you made a reservation," she said.

Having made reservations in seven hotels in seven states for this trip, I didn't remember the fine points of this particular one and, much to her apparent disgust, told her so.  At this juncture she suggested that maybe we were in the wrong place.  I asked if I could take a look at the sheaf of papers she was clutching, and there it was: a list of check-ins for the day that included our name and address and noted our room as the "William and Mary."

"We're in the William and Mary," I told her.  She did not object, but replied that her eye sight was not so good and that her husband, who usually looks after the check-ins, was still out.  I softened a bit realizing that this was all about her defensiveness about her eyesight and an inability to ask for help.  Then she noted that we were not supposed to arrive until between 4:00 and 5:00PM, and it was only 3:30PM.  My patience was thinning and my husband's had thinned, so that when she launched into a monologue about the sites of Niagara Falls, he interrupted asking for the key.  We left her at her perch in the entry hall, clutching the stack of paperwork and muttering about the Maid of the Mist while we proceeded up the stairs in search of the William and Mary amongst the fake floral arrangements, dolls, paintings, tea cups and throw pillows that crammed the house.

A walk to the Falls along the river was a welcome opportunity to stretch our legs.  We did the obligatory photos and postcard purchases before heading out for an early dinner where we encountered our next bout of Niagara Falls customer service.

At the Red Coach Inn, a faux British pub just across the street from the novelty garden set out in the shape of the Great Lakes, we butted heads with Lewis the maitre d'.

"Do you have a reservation?" countered Lewis.

Seriously?  The restaurant was at best a third full, a description that could just as well apply to Niagara Falls on the whole.  The New York side of the Falls is a shadow of its former glamorous honeymoon destination self.  Did we really need a reservation?

Sensing a window of opportunity, I eyed some empty bar stools, giving Lewis all the cue I thought he needed to suggest we either eat or at least wait at the bar until a table was available.  I was even hoping for an "I'll try to get you in sooner," but no such luck.  My husband had to suggest to Lewis that perhaps we could get a drink and wait at the bar.  Lewis seemed amenable to the idea, but was at pains to let us not he could not guarantee a table would be available by 7:30pm.

"Well we probably shouldn't wait then, should we?" husband asked, half sarcastically, half giving Lewis one last chance before we walked out the door.  Lewis didn't bother to reply, and we walked out the door, two blocks down to Niagara Falls very own Hard Rock Cafe.  Easy as it is to mock, the service was the best we had thus far.  The first night of our road trip ended with sangria accompanied by old videos of David Bowie, Marc Bolan, and Howard Jones, which was enough to even cheer up my husband.
Posted by Jennifer Richardson at 12:31 PM