The ultimate childfree vacation - Day 3 (on which we disciplined other people's children): Columbus, Ohio to St. Louis, Missouri 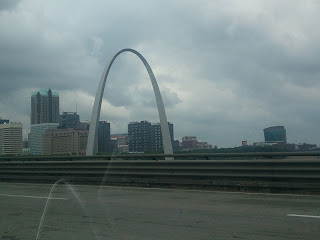 We drove from Columbus to St. Louis yesterday.  Other than farms, grazing cows, and faded red barns, I don't remember much about it.  I'm not sure if that's because it was non-descript, or because road trip fatigue is starting to set in, or because the destination, St. Louis was so unexpectedly great.  We actually stayed west of downtown, in an area called Dog Town, at a mock English hotel.  Those last two statements offer plenty of easy targets, but I won't take any pot shots because the hotel, the Cheshire, was great.  Sure the faux mottled walls were a little too uniformly mottled to look anything like a real English inn, but it was nicer and cleaner and friendlier than any English inn I ever frequented in the six years I lived there.

We had purposely set off from Columbus early -- foregoing the 10% discount for breakfast at Perkins that staying the night at the Red Roof Inn had entitled us to -- so that we would get to St. Louis by early afternoon to have time to look around.  We took advantage of the hotel's complimentary bikes to stretch our legs in nearby Forest Park.  After spending a few hours in the park I tried really hard to think of a nicer park in America or Europe and couldn't come up with one.  There is a zoo, a museum, lakes, and a restaurant (and those were just the parts we saw) laid out in a mix of woodland and more manicured surroundings.  I got into the spirit of St. Louis at the Boathouse restaurant by ordering BBQ brisket and locally brewed Schlafly ale.

The restaurant tables were next to a lake, and feeding the ducks was popular with kids.  One four-year old boy who got a bit aggressive in throwing the bread at the ducks incurred the wrath of my husband.  Wrath is actually a strong word.  It's a technique he has honed that walks the fine line between getting a misbehaving child's attention yet not drawing so much attention to himself to incur backlash from a protective parent.  It harks back to the Victorian days when children were to be seen and not heard, and anybody in polite society could reprimand them, usually with the enthusiastic approval of the parent.

"Don't do that," he told the boy.  Then, "DON'T DO THAT," louder, more deliberate but not yelling.  The boy looked at him incredulously and stopped.  It was clear no stranger had ever disciplined him.

After lunch we rented a pedal boat and tooled around the waterways for an hour.  When we returned the boat, another little boy had gotten overzealous feeding the ducks and fallen into the lake.  He seemed more embarrassed than hurt, and the restaurant staff were impeccable in handling the situation.  One got towels, another returned with a free souvenir t-shirt for him to change into, and a third got hot chocolate.  They may have all just been scared to death of a lawsuit, but it really did seem like they were just being nice.  I never thought I would be recommending places to go if you have kids on this blog, but the Boathouse in Forest Park, St. Louis, seems like an awfully good choice.  Your kid may even learn some manners from a stranger with an English accent.

Posted by Jennifer Richardson at 8:44 AM